The Center for American Progress recently published an important study on the well-being of women in the United States. Entitled, “The State of Women in America: A 50-State Analysis of How Women are Faring Across the Nation, the research evaluated each state by three categories deemed to be most critical to enabling female success: economic security, health and leadership. CAP’s study also broke down the findings by race and ethnicity.

“We really wanted to take a holistic look, a broad survey, of some of the different factors that impact women’s lives,” said one of the lead researchers, Anna Chu. “We wanted to think about what’s important to women and their ability to reach a healthy and secure life.”

In conjunction with the report, CAP also launched what they’re calling the “Fair Shot Campaign” in order to raise public awareness, and to push for policy solutions aimed at improving the chances for female success in America. The campaign, which mirrors the three categories of the research report, is going to highlight issues such as reproductive health care access, gender wage gap disparities, a higher minimum wage, paid-family leave, and increasing the number of women in leadership positions in both the public and private sector. Planned Parenthood Action Fund, Service Employees International Union and American Women (the 501(c)(4) branch of Emily’s List) will be partners in leading the campaign.

Organizing For Action, the nonprofit advocacy organization that grew out of the 2012 Obama campaign, has also already hosted over 140 house parties across the country to discuss CAP’s new research findings and how to move the research into policy.

Neera Tanden, CAP’s president, told Politico, that despite the historic 20-point gender gap in the 2012 election, the concrete policy changes that should theoretically follow such a dramatic shift, like paid sick leave, have yet to become a reality.

“With the pay equity issue in particular, women across the spectrum, regardless of socioeconomic status really feel, see and understand that it’s inherently happening,” said CAP Senior Fellow, Buffy Wicks, in an interview.

According to the data, women on average earn 77 cents for every dollar a man makes, but for African-American women that number is only 64 cents, and for Hispanic women, it’s a mere 53 cents.

“Women deserve to make 100% on the dollar for what men make,” said Chu.

Today’s minimum wage, which stands at $7.25, is reportedly 31 percent lower than the value of the minimum wage in 1968. CAP reports that if the minimum wage were raised to $10.10 per hour, an equivalent value to 1968’s, more than half of the beneficiaries, close to 17 million, would be women.

Employing progressive political behemoths like CAP, OFA, and Emily’s List, among others, signals a real power push to prioritize issues that affect women—issues that often remain on the backburner of the progressive agenda. And with exit polls from the 2012 election revealing that 53 percent of voters were women, with 55 percent of those casting votes for President Obama, the political impetus from the citizenry seems there, too.

The worry, of course, is to make sure that the policy progress amounts to more than just “trickling down” or “leaning in.” But CAP’s vision, to see economic security, health access and leadership opportunities as all inextricably linked indicates that what they’re organizing around is a much deeper political change.

In the wake of President Barack Obama’s recent announcement that he supports same-sex marriages, quite a few reactions have flooded the opinion pages, cable networks and blog sites. Of course, people are entitled to their differing views on the subject; and President Obama’s announcement certainly can be seen as a divisive one. It angers not only many conservatives, but also groups that are considered at the base of the Democratic Party, specifically African-Americans and Latinos. However, at a time when Gallup polls report that 50% of all Americans support same-sex marriage, this public affirmation from the President of the United States marks an important moment in history. 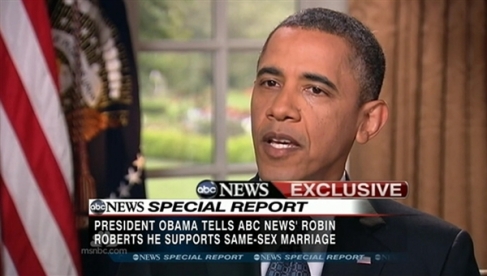 And yet, I almost refrain from using the word “history”, a term that opponents of same-sex marriage have so regularly abused and exploited. The word itself faces the threat of being rendered meaningless.

Republican Presidential nominee Mitt Romney declared in 2003, “I agree with 3,000 years of recorded history. I disagree with the Supreme Judicial Court of Massachusetts. Marriage is an institution between a man and a woman.” Recently Romney spoke at Liberty University, where he reaffirmed his position of nine years ago. He spoke of the “enduring institution of marriage,” one that defines itself as “a relationship between one man and one woman.”

He has other conservative supporters, of course. In January, Newt Gingrich boldly associated gay marriage with Paganism. Gingrich said, “It’s pretty simple: marriage is between a man and a woman. This is a historic doctrine driven deep into the Bible, both in the Old Testament and in the New Testament…the effort to create alternatives to marriage between a man and a woman are perfectly natural pagan behaviors, but they are a fundamental violation of our civilization.”

Conservative blogger, Erick Erickson writes, “In the past few decades, many people have decided that several thousand years of human history can be ignored in favor of unproven claims of happiness, fairness, progress, and an expanded notion of equality.”

It is imperative to do some fact checking of these ‘historical’ claims.

When Mitt Romney speaks about the “enduring institution” of marriage, does he mean the marriages of ancient Egypt where royal siblings would legally marry one another in order to keep their royal bloodlines pure? Or the marriages of the ancient Romans where daughters were human forms of currency, used to help form strategic alliances and strengthen the military position of the family?

Marriage is an evolving institution. It is both deceptive and manipulative to speak of the history of marriage as a stable, un-changing tradition. To be against gay-marriage is one thing; to depict marriage as a fixed institution is another.

Wedding vows, as we know them today certainly have not been around for “thousands” of years. The vows with the well known “to have and to hold, from this day forward, for better, for worse, for richer, for poorer” come from a man named Thomas Cranmer in 1549.

Society did not really even make the switch to marrying for love, a period known in sociology as “affective individualism”, until the Victorian Era. Prince Albert and Queen Victoria became the revered icons for a loving marriage. People began to grow distasteful of arranged marriages for economic purposes, and began to seek new meaning, namely love, in the institution of marriage.

When Erick Erickson argues that we’re ignoring “thousands of years of human history” I think the real question is which history is he referring to? Which marriage structure is he claiming we should fight to preserve? Arranged-marriages between a man and a woman? Polygamic marriages?

And if Erickson does mean marriages for love between a man and a woman—well, that is one of the most recent historical phenomena of them all.