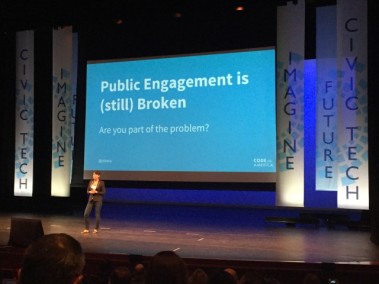 Technology in the service of democracy—“civic tech”—has become the cause of a growing number of coders, hackers, political strategists, non-profit executives, activists and others who come together at an annual conference called the Personal Democracy Forum (PDF). The most recent meeting in New York City on June 4 and 5 attracted about 850 participants. But as that meeting showed, the civic-tech world is divided on a fundamental question. Some strive to avoid anything that could appear partisan or ideological, while others believe that civic tech’s shared vision cannot come to fruition without challenging power.

“When a few have more than ever before, and many are asking for equal rights and dignity, civic tech cannot be simply about improving basic government services, like making it easier to know when the next bus is coming or helping you file your benefits more quickly,” Sifry and Rasiej wrote in a packet given to each conference attendee. While these innovations are helpful and represent the present focus of civic tech, PDF’s co-founders insist that those innocuous steps cannot define its future—not when the barriers to political participation are so divided by class, race, and geography.

Eric Liu, the founder and CEO of Citizen University also argued that impartiality is unacceptable and called for the civic tech community to focus its efforts on giving real meaning to the concept of equal citizenship. Liu urged the participants to ask themselves, “Am I developing work, tools, power, and ideas that actually help those who do not have access get access, those who do not have voice, get voice?”

Other speakers offered a vision of social change through collaboration. “Imagine how we can reshape the future of work together in humane and kind ways,” said Palak Shah, the Social Innovations Director of the National Domestic Workers Alliance (NDWA), who aims to improve labor conditions through market-based solutions. Shah tries to bring about “creative collisions” between “nannies and coders, activists and hackers” to build a mutually beneficial future for businesses and social movements.

One afternoon I attended a PDF breakout session called “Understanding and Overcoming Barriers to Participation”—a panel of researchers and experts exploring how to engage more people in civic life. Jon Sotsky, the director of strategy and assessment at the Knight Foundation, discussed some of his organization’s new research findings on millennials and voting. According to this research, while young people overwhelmingly believe they can have a greater impact locally, they are far more likely to vote in national elections. Sotsky attributed the lower rate of voting to a lack of good voting information at the local level—a problem, he said, the Knight Foundation will be addressing through new projects aimed at creating more comprehensive repositories of civic information.

No doubt we should conduct more research and improve local civic information. Whether that will actually make a difference in voter turnout is another matter.

“Technology cannot solve the big stuff, even if sometimes we’d like to believe it can,” Sotsky said, in one of the conference’s more humble moments. Technology’s role in these situations, he suggested, could be to help foster attachment between residents and communities, deepen social networks, and support the value of voting.

But we’ve already seen what can happen when the tech world turns to politics, as it did in the conflicts over SOPA, PIPA, and net neutrality. What if the same energy was directed towards removing voting restrictions?

There’s a lot about civic inequality that we already know. Some barriers to participation may be reduced through better-targeted education programs and redesigned civic forums. But political inequality is not something that will be solved by an app. There’s no Uber for voting. For the marginalized to have more power, others will have to relinquish some control, and we can’t escape or obfuscate that discussion.

In the 2012 election, only 50% of the youth voting bloc, Americans aged 18-29, turned out to cast their vote. That means 23 million young people did not participate, either because they were unable to make it to the polls, or by choice.

Low voter participation is a manifestation of political dysfunction. From an increasingly toxic influence of money in politics, to the sluggish speed at which our government legislates, to the apparent erosion, even within the highest levels of government, of respect for the Constitution—it is clear that the U.S. political system is not working for many of the millions of individuals it stands to represent.

But from where do these problems arise?

A root cause, and I define “root” as a problem that begets many other more serious problems, lies in our country’s de-emphasis and devaluation of civic education within our public schools.

Once prioritized by our leaders and legislators, civic education is now perceived as expendable. We’ve come to view standardized test preparation and international math rankings as more critically concerning than allocating time to teach democratic engagement.

The sad irony lies in that the original founders of public education saw public schools as precisely the place to cultivate conscientious, critical citizens. Thomas Jefferson, Horace Mann and John Dewey all believed that an educated citizenry was indispensible to a healthy and functional democracy. They recognized that to have a nation of ignorant citizens would render individuals incapable of electing good leaders or voting out of office those who abused their power. Horace Mann wrote in 1873, “Education is our only political safety. Outside of this ark all is deluge.” Jefferson in 1824 wrote, “The qualifications for self-government in society are not innate. They are the result of habit and long training.”

Until the 1960s, three types of courses in civics and government were common in American schools. Two of these courses, commonly known as “Civics” and “Problems of Democracy”, explored the role of citizens and encouraged students to discuss current issues. Those types of courses are rare today. The only course still typically offered in American public schools is “American Government,” which describes the institutions of government with scant reference to the role of citizens in making those institutions work.

The resulting deficit in civic engagement extends beyond low voting turnout. For example, as reported by the Campaign for the Civic Mission of Schools, between 1973 and 1994, the number of people who served as an officer of a club or organization, worked for a political party, served on a committee, or attended a public meeting on town or school affairs declined by over 35%.

African Americans and Hispanic students are twice as likely as their white counterparts to score below proficient on national civics assessments. A similar civic knowledge gap exists between America’s poorest and wealthiest students.

These disparities in knowledge and involvement do not result from inherent differences in aptitude or interest. They are the result of a public education system which affords far fewer and lower quality civic learning opportunities to minority and low-income students.

Let me be clear: there has never been a “golden age” of political participation in the U.S. political system. Throughout most of our country’s history, over half of all U.S. citizens were denied the right to vote. Nonetheless, I reject the notion that our democratic system is flawed in its essential design.

Increased emphasis on civic education, while not the sole solution to our political malaise, is surely a consequential one. If we want more U.S citizens to participate in democratic life– to run for elected office, to write op-eds, to join civic organizations, to work on campaigns, to lobby their elected officials—in sum, to do all the messy, hard, tiring work that is self-government, then we must teach our kids that political participation is fundamentally important.

We need to prioritize civic learning with the same urgency and conviction that our leaders speak about STEM education. It is only then will we see people vote in higher numbers, people join advocacy organizations, and people hold their government leaders accountable.

If we want to see a more equitable and effective political system, then we should start by revisiting our civic education policies.

Originally published in the Daily Beast on April 26, 2013.

The Israeli Finance Ministry’s new budget proposal states, among other things, that ultra-Orthodox schools will need to dedicate at least 55 percent of school hours to teaching the Ministry’s core curriculum if they wish to receive any state funds.

Though there are many serious, substantive problems in Israeli education that necessitate reform, and not all of them will be remedied by this new proposal, the bill does plan to address one fundamental problem facing the future of a democratic Israeli citizenry: civic education.

This past summer I traveled to Israel to learn more about how they teach civic education. I wanted to understand if and how the Israeli government fosters a sense of civic solidarity amongst Israelis who are divided into sometimes quite distinct public schools. Public schools, from a Durkheimian sociological perspective, are institutions meant to cultivate citizens—individuals with a shared understanding of norms, values and expectations of their society.

Within Israeli public education there exist four main school systems: an ultra-Orthodox system, a national religious system, a secular system and an Arab system. According to Israel’s Central Bureau of Statistics, the total number of students in the education system is expected to grow from 1.579 million students in 2013 to 1.695 million students by 2017—an increase of approximately 7.3 percent, at an annual growth rate of 1.83 percent.

The Executive Director of the Taub Center for Social Policy Research in Israel, Dr. Dan Ben-David, has been studying these population trends. If Ben-David’s findings continue on their current trajectory, it is projected that by the year 2040, 78 percent of primary school students will study in either ultra-Orthodox or Arab school systems.

There is nothing wrong with a changing demography, but it is important to ensure that there is an educational structure in place to prepare any and all citizens to participate in democratic society. As it stands now, ultra-Orthodox students are the only segment of Israeli society not required to formally study civics; this includes topics like minority rights, free speech and voting. The democratic future of Israel is already at risk, and this seems to add yet another unhelpful variable.

When I asked a representative from the Ministry of Education if this seems to present a great future challenge for socializing citizens, she replied, “Oh yes. It’s a big problem. But there are lot of politics involved so it is very hard to change.”

However, it seems as though the politics might indeed be changing. Newly appointed Education Minister Shai Piron said recently that he would refuse to fund institutions that do not teach civics, math and English. He declared, “The State cannot fund something that goes against its interests.

To be sure, organizations are already coming out to say that the proposal does not go far enough. Hiddush, an NGO that promotes the separation of synagogue and state, has criticized the bill, saying that it’s essentially “meaningless” because schools would only have to integrate 4-6 hours a week of core curriculum—an hour or less a day. Given that the core curriculum includes subjects like English, mathematics, science and Hebrew, it is unclear how these would be divided, and what role civics would play in such a division.

In Israel, policymakers are looking for a more equitable way to share both the resources from, and the maintenance of, a modern Western society. Addressing the role that the ultra-Orthodox play is a key step in that process. But when thinking about Israel’s future, it is important that civics be strongly prioritized as well. It is, arguably, most “core” of all.