As I walked through the streets of West Baltimore on Monday evening, small bright green opiates littered the sidewalk, pills left over from when the local CVS pharmacy was looted hours earlier. The air felt thick and musty—police had fired teargas canisters near the Penn-North subway station. By 6:15 PM, clouds of smoke were pouring out of the empty pharmacy, which filled with flames. At one point, protestors cut the hose that was being used to put out the fire.

Except for a few young activists hoisting “Justice 4 Freddie Gray!” picket signs, most people hanging around were not protestors. The majority of Baltimoreans on the streets were just snapping photos and watching the events unfold as spectators. Unlike Saturday’s protests, where thousands proudly marched, chanted, and gave speeches about accountability and justice for Freddie Gray, a 25-year-old black Baltimore resident who suffered a fatal spinal cord injury while in police custody earlier this month, Monday felt perilously chaotic.

By the corner of North Avenue and Pennsylvania, just a half-mile down from where Freddie Gray’s funeral took place earlier that day, two Maryland Transit Administration vehicles were burning. A wrecked police car sat in the middle of the street a few hundred feet down—every one of its windshields and windows cracked and shattered. Broken glass lay by its tires. By 9 PM, Maryland Governor Larry Hogan had deployed National Guard troops, Mayor Stephanie Rawlings-Blake announced there would be a weeklong 10 PM curfew, and all public schools were cancelled for Tuesday. The city was officially declared to be in “a state of emergency.”

Saba Nazeer, a local resident who works with the Right to Housing Alliance, a Baltimore housing justice organization, came out to watch one standoff unfold between high school students and the police. The cops knew to meet the teenagers because a flier circulating earlier on social media called for students to meet for a “purge” out by the mall after school. (Frederick Douglass High School is across the street from Mondawmin Mall.) Dozens of cops were ready to meet the 75 or so students that showed up. Things escalated quickly. Students hurled bricks, rocks, and bottles at the police; cops sprayed mace and teargas. Fifteen officers were injured in clashes around the city, six seriously, and two were hospitalized Monday evening.

“These kids were going to fight for their neighborhoods, and they want justice not just for Freddie Gray but for all those who have died at the hands of police in their communities,” Nazeer said, defending the students. “I’ve been seeing it all day, the police try to put fear in the communities, they harass and bully. They’ve been doing it for decades. And people are tired of it.” 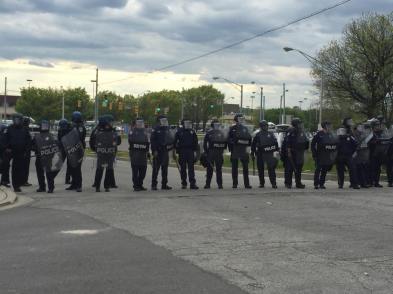 Speaking out Monday night, hours after the funeral, Freddie Gray’s mother Gloria Darden pleaded for the violence to end. “I want you all to get justice for my son,” she said. “But don’t do it like this here.”

A national conversation on police brutality broke out after the deaths of Michael Brown and Eric Garner last year, but local cops’ excesses have been a major political issue in Baltimore for a while now. A Baltimore Sun investigation released in September found that the city paid out $5.7 million in judgments and settlements in cases related to alleged police brutality and civil rights violations since 2011. Even before Gray’s death, the city was haunted by two recent high-profile incidents of unarmed Baltimore black men dying in police custody— Tyrone West in 2013 and Anthony Anderson a year earlier. Cops faced no charges following the deaths of either men.

Since West’s death in July 2013, Baltimore community members have convened outside City Hall every Wednesday to call for the police to be charged with homicide. (These weekly demonstrations are locally referred to as “West Wednesdays.”) Activists keep count— Monday marked day 648 since West’s death. While an independent review issued in August determined that the police did not use excessive force, some still insist they saw cops kick West in the head, yank him by his dreadlocks, and beat him with batons.

In September, an alarming video surfaced that showed a Baltimore cop repeatedly punching a man. Unable to ignore the damning footage, Mayor Rawlings-Blake vowed to develop a “comprehensive” plan to address police brutality in the city. A few months later, however, she vetoed a bill that would have required city police to wear body cameras. Rawlings-Blake has said she supports the measure, but felt the specific legislation proposed was not within the City Council’s authority.

Freddie Gray was arrested on April 12 after making eye contact with police and taking flight, but more than two weeks later the public has still not been given any meaningful details about how he sustained his fatal injury. (He died on April 19.) Last week, Baltimore Police Commissioner Anthony Batts admitted Gray was unbuckled when police placed him in a van despite being shackled and handcuffed, and noted that Gray’s multiple requests for medical attention were ignored. Other findings from the department’s internal investigation, however, have not been made public. More information will be released on May 1— a deadline Batts set to share findings with Baltimore’s State Attorney.

“This is one case where body cameras certainly would have been useful,” said Peter Moskos, a former Baltimore City Police Officer and professor at John Jay College of Criminal Justice. “We’d have a lot better idea of what actually happened, and we’d know far more quickly.” (A bystander’s mobile footage showed Gray writhing in agony as police carried him away.) 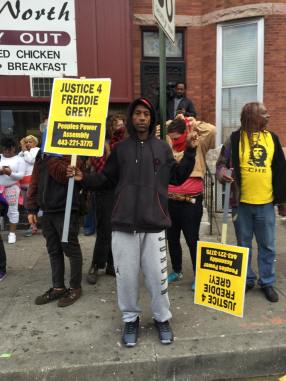 Baltimore Bloc, a grassroots activist group in Baltimore, has announced that they are planning another protest for Freddie Gray Tuesday afternoon at 3 PM. They told me that while their collective has been in “emergency response mode” for the past two weeks, eventually they will begin to outline more long-term plans. The “pace and emotion [has] left us with less space than we normally have to strategize,” they explained. But soon, they will join with other local organizing groups to “turn our attention to the next steps, including legislative strategy at the state level and organizing here at home for the 2016 city elections.”

Speaking at a press conference in the evening, Mayor Rawlings-Blake referred to the Monday rioters as “thugs” who were senselessly “trying to do tear down what so many have fought for.” Some 200 arrests were made by Tuesday morning. Brandon Scott, a city councilman, said, “We can’t let this be a repeat of 1968″—referring to the violent Baltimore riots that followed Martin Luther King Jr.’s assassination. “Adults have to step up and be adults.”

Tensions between political leaders, police, and community members are unlikely to abate any time soon, but multiple community cleanup efforts are being organized on social media today in West Baltimore. One group will be meeting back by the Penn-North subway station at 10 AM, and another will start at 2 PM by the University of Baltimore. Organizers have asked individuals to bring their own gloves, trash bags, brooms, and food.