Originally published in The American Prospect on April 3, 2017.
—-

In February, I reported on the first public union campaign at a charter school in Washington, D.C. Teachers at Paul Public Charter School wanted to form their own local—the District of Columbia Alliance of Charter Teachers and Staff (DC ACTS)—which would be affiliated with the American Federation of Teachers. Seventy-one percent of Paul’s staff signed a petition in support of joining DC ACTS, and asked their administrators on February 22 to voluntarily recognize their union.

When the administration refused to do so, Paul teachers filed for an NLRB election—scheduled for Thursday, March 30. (In a statement, the charter’s management said, “We do not believe that a union is necessary at Paul PCS.”) But the day before the scheduled vote, a surprising thing happened. The AFT, not the charter school teachers, called it off.

David Koenig, a government and history teacher at Paul told WAMU that their teacher organizing committee felt they had enough votes to win, and wanted to go ahead with their election, but “we did not have enough people who were willing to be public with their support to convince AFT that we were definitely going to win.”

While 58 of Paul’s 82 teachers, instructional aides, and counselors signed the initial union petition given to administrators in February, in the days leading up to the NLRB election just 33 people were willing to publicly commit to voting “yes” on March 30. Teachers on the organizing committee said that despite this, they were confident, based on private conversations with their colleagues, that they would still have a majority in support of the union when taken to a secret vote.

Experts who’ve studied NLRB elections have no such confidence, however. “If the teachers went forward, they would lose, absolutely,” says Kate Bronfenbrenner, the director of labor education research at Cornell University’s School of Industrial Labor Relations. “If workers will not publicly say that they will vote for the union, that means they are voting no. That has been proven a hundred times over.”

If the staff’s support for the union has dwindled, that looks to be chiefly the result of management’s opposition. Since the time teachers went public with their union campaign, Paul’s administration engaged in what some teachers described as an aggressive, scorched-earth effort to dissuade teachers from voting to unionize.

The charter school maintains that it never pressured staff on how to vote, and that it “support[s] the right of all employees to participate in such [union] activity.”

Make no mistake, this election will have a lasting impact on you, your job, and the entire Paul community.

We are deeply concerned about what this election means to Paul’s staff and our Scholars. We do not believe that this union would be good for you or for our school, and believe the entire community—including teachers and staff—will be better served by continuing a collaborative, cooperative dialogue and problem solving process that does not include a third-party union. One of the advantages that draws both teachers and students to Paul is our ability to work directly and efficiently with our staff on a range of things that matter to all of us. This allows us to meet the needs of our students and families while engaging directly with teachers and staff to create the work environment you need to be successful. We readily agree that this is not always been a perfect process and that it can always be improved, but by voting for AFT in the election, you may be voting away your legal rights to deal directly with Paul and your supervisors on issues that will determine your pay, benefits and working conditions.

We also believe that our future success and security hinges on our ability to provide a high quality education to our Paul Scholars. This is why their families entrusted them to us. We do not believe that the involvement of AFT will help any of us educate our students.

This issue is about our commitment to each other. You will be asked to decide whether you want to continue to have a cooperative working relationship with the Paul administration, or whether you want an outside third party, AFT, to speak for you. Remember, AFT can only promise to do things; we have proven that the Paul community can deliver when we work together. Our proud history demonstrates that we do not need outsiders trying to get us to work against each other.

Over the next few weeks, we will try to provide you with the facts about AFT and the potential impact of unionization at our school. We believe that once you get all the facts you will see that unionization is not right for Paul staff or students, and you will vote “NO.”

And in an email sent to staff on March 20, Paul administrators told staff to “PROTECT YOUR PAYCHECK. VOTE NO ON MARCH 30TH.” 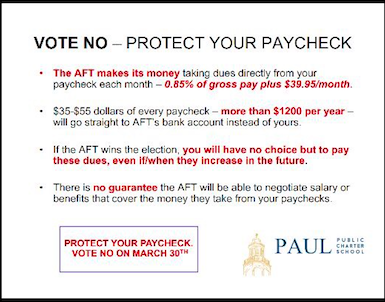 Moreover, on March 27, three days before the vote, Tammy Wythe, the school’s director of talent, sent a letter to Paul staff saying the school would hold off on issuing employment contract information for the 2017–2018 school year until after the NLRB vote. The school had previously told staff that they would receive this information by the end of March—acknowledging that “this information allows all of us—teachers, staff, and school leaders to plan for the next year.” The AFT filed an Unfair Labor Practice (ULP) complaint in response, saying administrators crossed a line by withholding information about whether teachers would continue to have their jobs until after the vote. (Following the election’s cancellation, the union withdrew its ULP.)

Despite all of this, the teachers still wanted to move forward with their vote. An AFT spokesperson told POLITICO that Paul’s administrators “created a toxic environment so full of fear, harassment and intimidation that we felt a fair election would be impossible at this time.”

From the union’s perspective, the fact that more teachers no longer wanted to publicly declare that they would vote for a union meant that management’s aggressive tactics were working, and that they had lost a significant amount of support.

By cancelling the NLRB election, teachers are able to schedule a new one in six months. If they had held the election and lost, then staff would have to wait one year before filing again. More importantly, from the union’s perspective, if the teachers lose their union election, then management might take that as a mandate to do whatever they want over the next school year. But by canceling it, management will have to remember that a failure—union advocates would say, a continued failure—to satisfy teachers’ conditions could mean that the staff could file again quickly for a vote. In other words, the union says it can help keep the boss on their best behavior.

Bronfenbrenner says that based on her 25 years of labor research, the AFT was right to conclude that the vote would fail given the drop in public commitments to vote in favor. “The initial petition is not a measure of ‘yes’ votes—it’s a benchmark as to whether you should go forward to the next step,” she says. “And if you vote and lose, it’s much harder to win than if you withdraw and try again. If you vote and lose, then the employer can go after the pro-union teachers and reward the anti-union ones. If they withdraw, then the campaign can continue.”

Despite not getting to vote for a union, it appears the staff’s organizing effort already helped increase teacher voice somewhat within Paul Public Charter. Since the teachers went public with their campaign, Paul’s administration added teachers to both the charter’s CEO hiring committee and the high school’s principal hiring committee.

The optics of canceling a vote that teachers wanted to hold doesn’t look great for the AFT, given that union officials regularly make a point to say that workers should have the freedom to decide for themselves if they want to be represented by a union. Bronfenbrenner stresses, however, that a unionization campaign isn’t about voting, per se. “It’s about winning. And if they vote, they will lose—they will get slaughtered,” she says. “It’s not democracy to let them vote. What would be democratic is to let them build their union.”

One Paul teacher, who didn’t want to be specifically mentioned in this article, said the campaign’s stalwarts are likely to continue organizing with their colleagues, but that it’s unclear what shape those efforts will take, or if they’d consider working with the AFT in the future.