Originally published in The American Prospect on February 13, 2017.
— 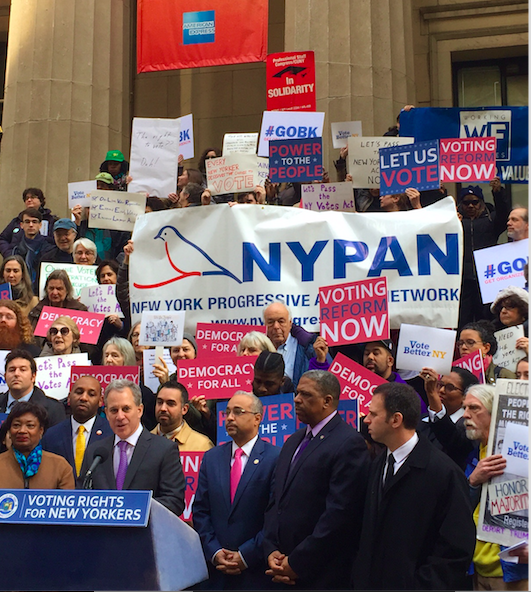 Last week on the steps of Federal Hall, the Wall Street building where George Washington was inaugurated and the Bill of Rights was introduced, New York Attorney General Eric Schneiderman unveiled the New York Votes Act, a package of election reforms he hopes can transform his state into a national leader on voting rights.

About 100 people gathered for the press conference, where Schneiderman was joined by representatives from Common Cause, SEIU, and other progressive organizations. The attorney general’s omnibus bill—which includes reforms like automatic voter registration and early voting—would mark a significant step forward for the liberal state that has the third-worst voting participation rate in the country, and ranks as the fifth-worst state for voter registration.

The New York Votes Act comes at a time when the president of the United States falsely claims that anywhere from three million to five million votes were cast illegally in the 2016 election, and when the new U.S. Attorney General refers to the Voting Rights Act as “intrusive.” Schneiderman, by contrast, said his office received literally thousands of complaints last year regarding barriers to voting, and “not one verifiable claim” of voter fraud.

“I have a lot more confidence to move voting reforms than I ever have,” he declared.

The event was organized amid a flurry of ongoing legal battles involving Schneiderman and other Democratic state attorneys general who are challenging President Trump’s executive order banning citizens traveling from seven Muslim-majority countries, and suspending refugee entry into the United States. Schneiderman filed suit in New York federal court challenging the ban, and he joined 18 other Democratic AGs in filing an amicus brief to support Washington’s attorney general, who also sued.

Earlier that same morning, Schneiderman stopped by for a Bloomberg TV interview where he fielded questions on the legality of the Muslim ban, and his thoughts on defunding so-called sanctuary cities. Calmly pushing back on the idea that there’s legitimate national security rationale for the executive order, Schneiderman said Trump’s actions are clear efforts to discriminate. Immigrants comprise 23 percent of New York’s population, and barring travel, Schneiderman said, would hurt all the state’s residents, and every state institution and business.

Schneiderman has a long history of activism on behalf of New York’s disadvantaged. Bill Lipton, the New York State Director for the Working Families Party, first met him in the 1990s, when Schneiderman was leading a legal team against subway fare increases which would have disproportionately hurt low-income communities and people of color. “It was an innovative legal strategy, and foreshadows a lot of what we see today,” Lipton recalls. “At this point I think it’s safe to say that Eric is one of the most important Democrats in America, and going beyond that, he’s really a leader of the resistance against Donald Trump.

Schneiderman was suing Trump well before his fellow AGs got around to it. Sitting in his 25th-floor office in Lower Manhattan, he told me what he’d learned from fighting the president in prior litigation. In the summer of 2013, two years before Trump announced his candidacy, New York’s AG filed a lawsuit, alleging that Trump University was a scam that ripped off thousands.

“From our perspective, his response to our suit was really a preview of the scorched earth tactics he’d go on to use during the presidential election,” Schneiderman said. Trump created a website to attack Schneiderman, sued him for $100 million, and filed ethics claims against him—all of which went nowhere. The case ended this past November, with Trump agreeing to settle for $25 million.

“Look, Trump has had a successful career involving charming people or bullying people, and at this point in his life, we shouldn’t expect anything different from him,” Schneiderman said.

Keenly aware of the threats posed by the president, New York’s AG emphasizes the importance of states—especially progressive, liberal states—in checking federal power. He feels frustrated with the Democratic party over the past 30 years, which has focused too narrowly on federal elections and failed to invest in local politics. New York is a particular source of frustration for liberals: The Democrats control the governorship, the Assembly, and have a numerical majority in the state senate—but do not control it, since several Democratic senators caucus with Republicans.

“My approach is much more grassroots, and our problems need to be dealt with aggressively,” Schneiderman said. “Activists and donors have to be demanding of elected officials. If you give a good speech, that’s great, but if you’re not actually passing laws and enacting policies that make the lives of people better—then maybe you need to be replaced.” Back when Schneiderman was a state senator, he engineered successful campaigns to elect more progressive Democrats to New York’s senate.

The attorney general’s legal hero is Charles Hamilton Houston, the attorney behind the NAACP’s legal campaign to end racial segregation. Schneiderman calls him a role model—a “strategic, activist lawyer” who consciously used the law for social change. Though Houston died four years before the Supreme Court issued its landmark Brown v. Board of Education ruling, it was his protégé, Thurgood Marshall, who argued the case in court. A picture of Charles Hamilton Houston hangs behind Schneiderman’s desk in Albany.

Schneiderman is hopeful, noting that the level of democratic and progressive activism he’s seen since Election Day surpasses anything he’s witnessed since the 1970s.

“It’s important to support groups like Planned Parenthood, but we also need to channel that grassroots energy into passing specific legislation,” he said. “And as state politicians, Democratic AGs are in a great position to lead on that.”