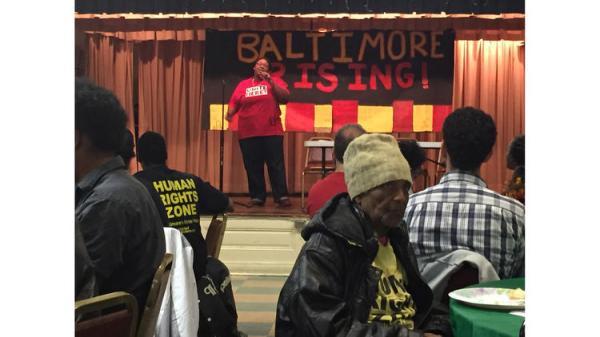 In mid-November, residents from all over City Council District 9 packed into the basement of the Metropolitan United Methodist Church to launch the Baltimore Rising campaign. Seated at dozens of tables throughout the basement, eating home cooked mac and cheese, fried chicken, and string beans, the crowd was enthusiastic.

“Freddie Gray happened in our faces, we saw that right in our face,” said Alberta Palmer, a UNITE HERE organizer, from the stage. “The vacant houses, how many of you can walk out the door and there [they are], right in your face. They beat us down, but one thing I do know is that when people get together, they can beat us down. But they can’t defeat us.”

“That’s what we saw happen in April, we became Stephanie [Rawlings-Blake]’s problem. We’ve gotta keep moving, we’ve gotta keep pushing, we have to organize our homes, our jobs, our blocks, our families, and get this thing done…we’re playing defense. Let’s defend. Organize means get together as one, one voice.”

The crowd clapped and hollered.

“We don’t have all the money in the world, oh they’re making sure of it. But we have power if we’re together. How many people believe this can be done? It can, it has.”

UNITE HERE, the union representing hospitality staff, was co-hosting the event with United Workers, a group that first came about in 2002. Peter Sabonis, a lawyer and co-founder of the Homeless Persons Representation Project, wanted to figure out how to help homeless day laborers fight for better working conditions. “These guys would go to these temporary staffing agencies at 4:30 in the morning, where they’d wait for an assignment, like a construction job, and the agencies would transport the homeless across the region to work for a day as temporary employees,” explained Sabonis. “You’d come back at the end of the day and get paid, and there’d be all these deductions, and a lot of exploitation.”

Sabonis reached out to Todd Cherkis, a man living in Washington D.C., who had previously organized day laborers in Atlanta.

“Peter was really interested in figuring out a way to use our legal muscle to change things,” recalled Cherkis. “Exploitation of day laborers is a legal problem. But it’s more of a power problem, and what we really needed to do was organize workers because where we had most of our leverage wasn’t necessarily with the laws on the books.”

After Cherkis came on board, United Workers began to hold two-hour weekly meetings in a homeless shelter, located in a converted firehouse on Eutaw Street. People would come, organizers would serve pizza, and together the group would study the temp industry and strategize.

Soon they began taking trips—like bus tours across the country with the Poor People’s Economic Human Rights Campaign, and down to Florida to meet with the Coalition of Immokalee Workers, a human-rights organization focused on farmworker labor standards.

In 2003, United Workers joined over a thousand people for a three-day, 34-mile march from Fort Lauderdale to Miami, calling for free trade policies that respect human rights and the environment. When United Workers returned to Baltimore, they decided to take on free trade from a local perspective, ultimately creating a video focused on Sparrows Point and the crippled manufacturing industry.

Despite their name, United Workers is not a labor union.

“They’ve always called themselves a human rights organization, and at first the distinction didn’t mean a lot to me,” said Sabonis. But now, he said, he appreciates the strategic value of working outside the confines of traditional labor law, which has been severely weakened over the past forty years.

Their first big organizing victory came after a three-year effort to push Camden Yards to pay its workers—most of whom were homeless day laborers—a living wage. They pitched the campaign as a way to put the needs of the low-wage staff ahead of the profits of the temp agencies. The workers, who threatened to stage a hunger strike, went from earning $4.50 an hour in 2003, to $11.30 an hour by 2007.

Bill Barry, the former director of Labor Studies at the Community College of Baltimore County, said the homeless workers engaged in the campaign were “just really inspiring.” Following their Camden Yards victory, Barry invited them to his class to meet his students.

The next year, United Workers switched gears to focus on the Inner Harbor, which Cherkis described as “essentially a privatized public park for tourists—paid for with money from public sources—that creates anti-union, low-wage, and seasonal jobs.” Beginning in 2008, the organization launched its Fair Development Campaign, and called for the 1,500 workers in the Inner Harbor to earn a living wage and receive subsidized healthcare and education.

Their campaign had mixed success. In 2011, United Workers, in partnership with the National Economic & Social Rights Initiative, published a report—”Hidden in Plain Sight”—which documented Inner Harbor worker abuses like wage theft, sexual harassment, and erratic scheduling. It was the first investigation of its kind.

They hoped to publicly pressure General Growth Properties, Inc. (GGP), the company that owns Harborplace, and David Cordish, the developer who owns Power Plant. Modeling organizing strategies pioneered by the Coalition of Immokalee Workers, United Workers focused on the “top of the profit chain” of the Inner Harbor, rather than individual restaurants like the Cheesecake Factory.

Though in the end, public pressure was not enough. Sabonis says United Workers just didn’t really have the infrastructure to make that sort of campaign work, and, in retrospect, underestimated how hard it would be to organize those workers.

“It was an emotional, good campaign, but making it a moral crusade doesn’t necessarily get you anywhere,” said Bill Barry.

United Workers came away from the experience slightly discouraged, but with a much closer relationship to UNITE HERE. United Workers decided it was time to look beyond individual workplaces and take their fair development efforts into neighborhoods; a year later, in 2013, the group released its Fair Development principles for city-wide policy: commitments for universality, equity, participation, transparency, and accountability.

“We discussed human rights budgeting, a campaign for permanently affordable housing, and we laid out a plan of where we felt this was coming from and where we needed to go,” said Rachel Kutler, an organizer with the group.

In an op-ed in The Baltimore Sun a few weeks after the riots, Todd Cherkis and Peter Sabonis called for greater public sector investment. The city has the money for it, they argued, given that it approved $558 million in municipal bond spending over the last 11 years, on top of millions in tax increment financing, abatements, and exemptions. United Workers advocated for a $200 million municipal bond to deal with vacant housing around the city—specifically to rehabilitate at least 3,300 of the city’s 40,000 vacants, and to put unemployed residents back to work in the process. The group also called for community land trusts, affordable housing, and good jobs.

Are the goals of United Workers and those of local activists fighting for police reform mutually exclusive? Todd Cherkis vehemently says no. “We had a protest planned for April that we spent most of last year getting ready for, but then it happened to be right when there was also a protest for Freddie Gray starting,” he said. “We told our leadership and our members, if you want to go to the other protest we will provide you with rides and support to get there, if you want to do both we’ll help you do that, too. We’re not going to have people choose one injustice over another. You can’t have economic justice and not deal with racism.”

Last summer, United Workers canvassed more than 5,000 homes, speaking with over 1,300 people to learn about the local issues that most concern them. By November, the group had launched its Baltimore Rising campaign, in partnership with UNITE HERE, to galvanize support for quality jobs, affordable housing, and fair development. (The campaign has since been renamed “The Power of Our Potential” after a conservative political advocacy group also named Baltimore Rising formed several months later.) Throughout the campaign, members have been promoting a “20/20 Vision”—a call for $20 million annually invested in public bonds for community land trusts, and $20 million annually invested in public bonds to hire the unemployed to help deconstruct vacants.

“We realized this is an opportune moment with the upcoming election and local primaries to pursue something like this and push for a real city-wide agenda,” said Cherkis. As a nonprofit, United Workers won’t endorse any specific candidates, but will aim to educate politicians about the issues to focus on.

In January, when Governor Hogan announced his $700 million initiative to demolish vacants and redevelop poor neighborhoods, community advocates were quick to point out that he was actually putting forth very little new money, and no new funds for affordable housing. Removing vacant properties can either be a really great thing, they argued, or it can be the first step to displacing the poor, if nothing else is done to address the speculative pressures on the housing market.

And now, as the city sorts through details surrounding Port Covington and Under Armour’s half-billion dollar tax-increment-financing deal that subsidizes the developer, United Workers is stepping up its advocacy.

“I think we have made a difference in changing the development conversation, and that’s a step in the right direction,” said Cherkis. “But where we stand is, well, what is the agenda that communities want?”

Calling for serious public investment to create legal entities like community land trusts, United Workers said it is asking city officials to place Baltimore residents at the center of development decision-making, for what would really be the first time in more than 60 years.