Originally published in The American Prospect on March 2nd, 2016. 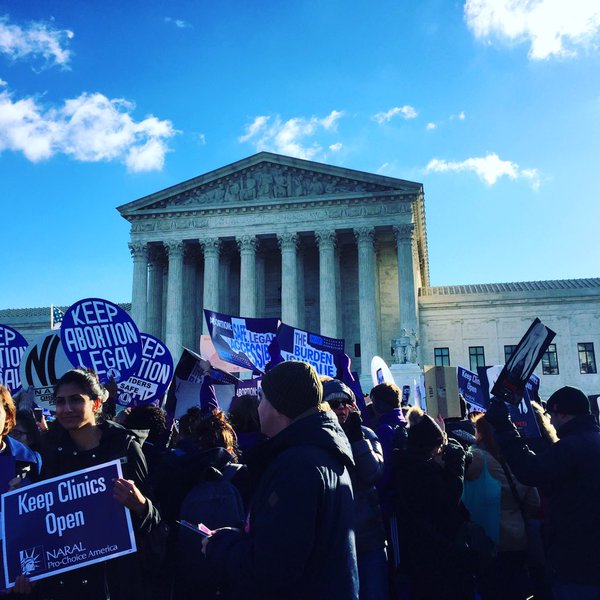 A deeply and now evenly divided Supreme Court heard oral arguments on Wednesday in the most consequential reproductive rights lawsuit to come before the high court in nearly 25 years.

The touchstone for the justices, who now number only eight since the death last month of Antonin Scalia, was the standard established by the high court in its 1992 ruling Planned Parenthood v. Casey, which found that abortion restrictions may not place an “undue burden” on women seeking to terminate a pregnancy.

At issue in the current case, known as Whole Woman’s Health v. Hellerstedt, is a package of abortion restrictions passed by the GOP-controlled Texas legislature in 2013. During oral arguments Wednesday, the eight justices seemed divided along predictable ideological lines. The Court’s four conservatives challenged whether the Texas restrictions impose an “undue burden” on women, and its four liberals questioned the medical necessity of the restrictions.

In Casey, the court ruled 5-4 that states may legally pass restrictions on abortion access so long as those restrictions do not create unreasonable obstacles for women who seek to exercise their constitutional right to safely terminate a pregnancy. InHellerstedt, reproductive rights supporters have set out to prove that Texas’s new restrictions indeed violate the standard established under Casey.

The Texas law, known as HB2, requires that all abortion providers in the state obtain admitting privileges at a local hospital, and that clinics meet ambulatory surgical center (ASC) building standards. A key argument from the plaintiffs challenging HB2 is that these requirements have led to the closure of roughly half the state’s abortion clinics.

Chief Justice John Roberts and Justices Samuel Alito and Anthony Kennedy all questioned whether there was sufficient evidence to make that claim. Stephanie Toti, the attorney representing Texas abortion providers, noted that in the five years prior to HB2’s passage, the number of abortion clinics in Texas stayed relatively constant. Once HB2 became law, however, eight clinics closed in anticipation of the restrictions, and 11 closed the day they went into effect.Toti argued that the timing of the closures, as well as testimony from the plaintiffs, provided ample evidence to show that the clinics closed as a result of HB2’s mandates. But the conservative justices seemed unconvinced.

The four liberal justices all pressed Texas Solicitor General Scott Keller on why the admitting privileges and the ASC requirements were medically justified. They pointed out repeatedly that Texas has not required other providers of such outpatient procedures as colonoscopies and liposuction to meet ASC standards, despite the fact that those procedures carry far greater medical risk. (The American College of Obstetricians and Gynecologists and the American Medical Association have also said there is “simply no medical basis to impose a local admitting privilege on abortion providers.”) Moreover, Justice Stephen Breyer noted that even if the Texas legislature thought it was improving women’s health care by putting these standards in place, there’s evidence that women now face more barriers to abortion access, which increases the likelihood for riskier late-stage or self-induced abortions.

Another disagreement centered on whether the few abortion clinics left in Texas are capable of providing service to everyone who needs reproductive care in the state. More than 70,000 women in Texas seek abortions each year, but Alito argued that it’s impossible to know for certain whether there are too few clinics because “we really don’t know” what the capacity is of the existing providers. Donald B. Verrilli Jr., the U.S. solicitor general, disagreed, arguing that it’s “common sense” that just eight, nine, or ten clinics in all of Texas would not be enough to meet the demand.

The case’s outcome rests largely with Kennedy, the justice who originally helped craft the vague “undue burden” standard in 1992’s Casey decision. If Kennedy sides with the state of Texas, that will presumably leave the high court deadlocked 4-4. That would leave in place the Fifth Circuit Court’s decision to uphold HB2. But it would also mean that the Hellerstedt ruling sets no new national precedent. Kennedy also signaled the possibility of sending the case back to the lower court for remand—or further fact-finding—to better determine whether the number of clinics left in Texas can meet the state’s demand for abortion. It’s possible that another version of Hellerstedt will return to the Supreme Court when a successor to Scalia is appointed. The Hellerstedt ruling is expected this summer.

Hundreds of reproductive rights supporters, dressed in purple, and anti-abortion activists, wearing blue, rallied energetically outside the Supreme Court this morning in the cold; holding up signs, chanting songs, and making speeches—at times drowning one another out. Some supporters camped outside the high court Tuesday night, while others arrived early in the morning by bus, from states like North Carolina and Georgia, and cities like Philadelphia and Cleveland.