I’ve been hearing a lot of things lately about the new Pennsylvania Voter ID Law (or “Voter Suppression Law” as some call it.) This new law while championed by some as a civic necessity for ensuring safer and more valid democratic elections, is opposed by major organizations like the ACLU, NAACP and the AARP. They argue that this law adds more hurdles to voting and will thus ultimately infringe certain voters, particularly minorities and the elderly.

(Received this in my inbox today)

I looked into it and this is what I’ve discovered:

So just generally:
With this new law, a voter must present a valid photo ID at the voting booth every time he or she votes. Prior to this law, photo ID was only required the first time a voter appeared to vote in their district. After that, they were allowed other forms of ID, including utility bills and government checks.

Types of acceptable identification from:
….the US Government (such as a passport)
….the Commonwealth of PA (such as a driver’s license)
… a PA care facility (such as a nursing home)
….a municipality to an employee, or
….a PA higher education institution (such as a college or university)

The ID must have an expiration date and it can’t be expired unless it’s a military ID, or if it’s a PA driver’s license, it can be expired up to one year.
(Jonah Mann sent me this article, that as of now under the current law, college IDs from Drexel, Penn State, Lasalle and Point Park universities cannot be used as identification for voting because they lack expiration dates.)

If you don’t have a photo ID at the time of voting, but you do possess one, (left it at home or something) you can still vote on a provisional ballot, and if you show up at the county board of elections office within 6 days of the election to show them your ID, they will count your vote.

People argue that this law is a good thing because it can prevent voter fraud. However, the amount of voter fraud is unclear.

For instance, there is voter fraud not related to voter impersonation, which photo IDs would not help to prevent. According to the Brennan Center, “It is more likely that an individual will be struck by lightning than that he will impersonate another voter at the polls.” They argue that most cases of voter fraud “can be traced to causes far more logical than fraud by voters,” including clerical or typographical errors, mismatched entries, and simple mistakes on both ends.

An example is the 1960 Presidential election between Richard Nixon and JFK where there was alleged to be a lot of voter fraud.  Here’s the full summary. Essentially convictions are hard to come by in our judicial system, and despite the lack of a single conviction, (over 650 were brought to trial) it doesn’t mean voting impersonation fraud didn’t exist or is unimportant. In fact, just the opposite. If Nixon had won two of the states that were being disputed, Illinois and Texas, he would have been President instead of Kennedy. So whether or not there was voter fraud, there was heated voter fraud controversy, and these new laws could help with situations like that.

Challenges with the Law:
So then why do groups like the the NAACP, ACLU and AARP oppose this law so much? The Obama campaign criticized the measure as “a costly bill to address a non-existent problem” and Democratic lawmakers and the American Civil Liberties Union vowed to challenge this law in court.

People argue the law will disenfranchise minorities who often can’t afford to make the trips to obtain necessary documents required to gain proper identification. This could also hurt the elderly, who often physically cannot make the trip to renew and update their exisiting photo identification. According to Karen Buck of the Senior Law Project, 18% of the elderly do not have photo i.d., but that number is surely higher if you also count those with expired photo IDs.

Stephanie Singer, chair of the Philadelphia City Commission (which runs elections in the city) argues with others that the law creates more problems than it fixes. She said, “If this legislature were serious about [voter fraud], they would be funding poll worker training, data forensics, aggressive investigation of the voter registration lists.”

Governor Corbett who signed the bill into law, described the new law as a preventive measure. The new law and photo requirement will be in full effect for the November 6th election.

It should be noted that a similar case for the state of Indiana was brought to the Supreme Court in 2008. The Supreme Court ruled that the voter ID law did not violate constitutional rights. The law “is amply justified by the valid interest in protecting ‘the integrity and reliability of the electoral process,'” Justice John Paul Stevens said in an opinion that was joined by Chief Justice John Roberts and Anthony Kennedy. But in dissent, Justice David Souter said Indiana’s voter ID law “threatens to impose nontrivial burdens on the voting rights of tens of thousands of the state’s citizens.”

In my opinion, if the government is requiring all of its citizens to have proper identification, then they should take on the responsibility of helping those who have difficulty getting them, get them. Democratic organizations are already gearing up on photo-ID education campaigns. But for something as important as this, I don’t think it should come down to partisan efforts, and should instead be a concerted national campaign, rather than a Democratic one. I also have serious doubts about how easily elderly folks will be able to get out to renew their expired identification. 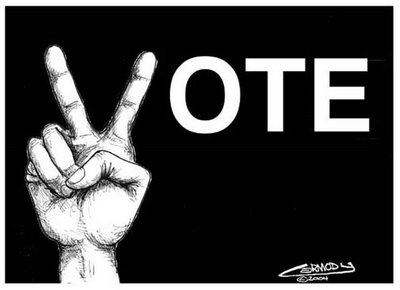