Today I attended my grandfather’s 90th birthday party. It was an interesting experience, seeing a room filled with so many people spanning different generations. We had my 90-year-old grandfather holding my six-week-old cousin’s hand. And it made me wonder, how does 2011 look to someone born in 1921?

When I hear “1920” I think of abstract AP US history identifications. Flappers and stock market crashes. Nativism and Immigration bills. Wilson and World War 1. Not my real, breathing, brownie-baking grandfather.

I started to think about what it must have been like to witness all that he has. From the depression, to the New Deal, to fighting in the World War 2, to the Cold War, to the computer, to 9/11, to cell phone apps. 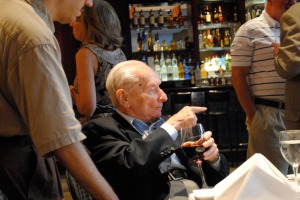 Now, I could be off the mark with this thought, but I think as my generation and I get older, the changing world will be a lot less scary and foreign for us in 70 years than it was for my grandfather. And I think it’s because we’re always expecting it to be. I understand that the world I’ve grown up in is changing at a much faster rate than in any other period in human history. Every time I find a new device or company that I love, I use it happily while also keeping the thought in the back of my mind that in 2 years it just might not exist.

I can recall so clearly 5 years ago when all my friends bought blackberries. Everyone wanted to BBM. If you had an upgrade, you were getting a blackberry. (Unless your parents didn’t want to pay for a data plan, which is understandable. But you were jealous.) Now no one is buying blackberries anymore and iPhones are dominating the cellular market. I use my iPhone4 knowing well that the iPhone 5 is coming out soon, and in a few years, developers will have created apps and features that won’t function on my future obsolete phone, even though for the moment, it’s state of the art.

Every program I use I know developers are working on an upgrade that will be released in a matter of time. Every technology I find convenient, I know brilliant computer scientists, businessmen, and engineers are out thinking of innovative new ways to beat that product. “Disruptive technology” was a term my friend Max said to me today as we were talking about this.

For the majority of the 20th century, disruptive technology just wasn’t something people had to deal with that much. When the television came out in the 50’s that was a big deal. People were outraged, scared and delighted. People were convinced the television had forever changed life as they knew it. And though hyperbolic, I can understand their hysterics. They had hardly any practice in adapting to disruptive technologies. But we are. We anticipate it in a way I don’t think ever has really been before.

So what does that mean for us? Well, I don’t really know. I by no means claim that we’ll be able to be compete in our old age with savvy twenty-year olds. They’ll most likely be sharper and cleverer than us. But…. I still have this feeling that we’ll look at our rapidly changing world not with an outsider’s eye. We’ll have grown up with the pace of the world, and it’s our pace. I’ll argue that it will be much harder to feel like foreigners to a pace we’ve always been conditioned to expect. 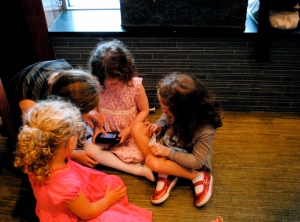